"In August 2019, [Dexter] Roberts was our featured speaker at The ELEVATE Leadership Series at the New York Stock Exchange. This is our annual event in NYC for global brands, retailers and vendors where we share the latest data and trends in responsible sourcing, and shifts in traditional and emerging sourcing destinations. [Dexter's] insightful and in-depth talk "From Factory of the World to Superpower: China's Troubled Transition" provided excellent contextual material and perspective on the China market for the corporate leaders attending our event."

"Tiff was the editor for Bloomberg Businessweek in China when I helped to launch the inaugural Global Green Business Summit in Tianjin for the company. He participated as moderator for the forum, I was not only impressed with his insight and knowledge on 'green business' and China, but his outstanding speaking skills and keen ability to engage speakers and audience."
~ Christina Lee, Founder & CEO, Global Green Connect & GGEF

"Dexter's public speaking skills convey a command of his subject and are coupled with the fluidness of his insights on the vast subject of China. The clarity of his thought is combined with timely stories of the lives of people, adding a public face to the struggles of a nation racing into the 21st century, while carrying the legacy of breakneck modernization. There are few who can articulate and inform on this kaleidoscope of events, it's people, history, economics and the grand geopolitical game as it plays out in real time, as well as Dexter Roberts."

"Tiff Roberts participated in the Helena Education Foundation's Great Conversations event, a dinner featuring 35-40 topics, each with a table leader. His guests were enthusiastic about their opportunity to spend an evening with Tiff discussing the United States' relationship with China. 'Tiff was a knowledgeable speaker with a relaxed conversational style. He has seen a lot of change in China during his 23 years there, and he has a good grasp of how the economy has evolved,' said one participant. 'I really thought Tiff was exceptional! I think this was the best table discussion I have experienced at Great Conversations,' another commented. 'Tiff's 23 years of reporting from China provided a wide variety of backgrounds and perspectives on this critical foreign economy that's probably [become] our country's key economic story… The changing manufacturing economy in China due to increasing wages explained a great deal about why more goods are coming from other Asian countries. It was also interesting to hear his thoughts on the trade wars. He had watched them his entire time in China and how they were handled by several different leaders in both countries,' commented one more."
~ Lisa Cordingley, director of the Helena Education Foundation 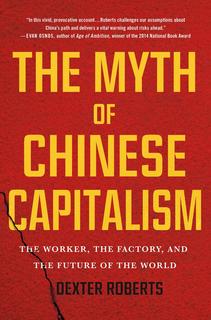 Dexter Tiff Roberts is an award-winning writer and speaker serving as a Senior Fellow in the Atlantic Council's Asia Security Initiative, a Fellow at the Maureen and Mike Mansfield Center, and an adjunct instructor in political science at the University of Montana. He is a regular commentator on the U.S.-China trade and political relationship. Previously he was China bureau chief and Asia News Editor at Bloomberg Businessweek, based in Beijing for more than two decades. He has reported from all of China's provinces and regions including Tibet and Xinjiang, covering the rise of companies and entrepreneurs, manufacturing and migrants, demography and civil society. He has also reported from North Korea, Mongolia and Cambodia, on China's growing economic and political influence. His recent reporting has focused on how legacy policies from China's past, including its household registration system, are leading to growing inequality and social tension, and are holding back the country's development.

Roberts has won numerous journalism honors, including Overseas Press Club awards, the Sidney Hillman Foundation prize, Human Rights Press awards, and Society of Publishers in Asia editorial excellence awards. He has a bachelor's degree in political science from Stanford University, where he was a National Merit Scholar, and a master of international affairs focusing on China and journalism from Columbia University, where he was a recipient of the New York Financial Writers Association Scholarship. He is fluent in Mandarin Chinese and studied at National Taiwan Normal University's Mandarin Training Center in Taipei, Taiwan. Roberts' first book, The Myth of Chinese Capitalism: The Worker, The Factory, and The Future of the World, was published by St. Martin's Press in March 2020, the audio version, was published by Tantor Audio on July 31, 2020, and the Chinese edition, 《低端中國：黨、土地、農民工，與中國即將到來的經濟危機》was published by Gusa Publishing on March 31, 2021. He has launched a China trade newsletter titled Trade War and is represented by Macmillan Speakers Bureau.

Praise for The Myth of Chinese Capitalism

"An unvarnished look at the rural migrants who have fuelled China's long boom but remain second-class citizens. The author combines sharp analysis with the story of a family he followed for two decades."

"Tenacious reporting that seeks to expose the murky underside of the Chinese miracle... [Roberts] has been following the main characters who people this book for nearly 20 years, which is a sort of perseverance that few other writers can match." —Financial Times

"What Beijing has touted as a better model of economic growth is actually based on systematic exploitation of its rural population ... Roberts provides a convincing structural answer to this question that implicates Beijing's leaders themselves." —Axios

"A gimlet-eyed look at an economic miracle that may not be so miraculous after all." —Kirkus Reviews

"Roberts blends economic analysis with human-interest reporting in this probing and accessible examination of the current state of the Chinese economy...a clearheaded and persuasive counter-narrative to the notion that the Chinese economic model is set to take over the world."

"Roberts has given a well-sourced, thoughtfully reasoned, and cogently-written narrative of the largest migration in human history . . . . [He] helps us understand why this could be an even more disruptive tipping point moment not only for China, but the global economy."
—Orville Schell, Arthur Ross Director, Center on US-China Relations and co-author of Wealth and Power: China's Long March to the 21st Century

"Dexter Roberts gives a sophisticated and readable take of China's triumphs and crises. He introduces us to global CEOs and takes us on tours of China's sprawling factory floors, but is most at home in the China's left-behind countryside. There, Roberts' decades-long contact with farmers and ex-factory workers shows systemic problems that could prevent China from becoming a wealthy country. A first-hand witness to China's transformation over the past quarter century, Roberts credibly challenges the myth of China's inevitable rise and global dominance."
—Ian Johnson, Pulitzer Prize-winning author and Beijing-based correspondent

"Ever bought a made-in-China handbag at Walmart and wondered who made it? It's possibly someone whose experience is similar to the people Dexter Roberts writes about so vividly in this smart and compelling book, workers who struggle to make a living and face deep discrimination in China's cities. A potent mix of personal stories and deft analysis, The Myth of Chinese Capitalism takes a hard look at China's migrants and rural people – together one-half the country's population - who fueled their country's manufacturing boom, but for whom the China dream remains elusive."
—Mei Fong, Pulitzer Prize-winning journalist and author of One Child: The Story of China's Most Radical Experiment

"Anybody doing business in China should read this book . . . . By taking us from impoverished villages to factory floors and into the lives of unsettled migrant workers and overwrought bureaucrats who struggle to meet the goals of Party leaders, Roberts lays out why the assumption of an ever-larger China market is uncertain, with implications for multinationals everywhere."
—James McGregor, author of One Billion Customers: Lessons From the Front Lines of Doing Business in China

"There's an enormous gap between how 'China's rise' looks from a distance, and how its realities affect the hundreds of millions of poor and rural Chinese people still looking for a better life. Dexter Roberts has reported on these realities for decades, and he does a wonderful job of combining vivid personal stories with provocative larger points about China's fate. Anyone who hopes to understand China's strengths and vulnerabilities will want to read this book."
—James Fallows, national correspondent for The Atlantic and author of China Airborne

"In this vivid, provocative account, Dexter Roberts leaves the glittering cities that attract too much of the world's attention, and tells the story of China's other half – the farmers and migrants who may never reach the mythic goal of middle-class life. Deeply fluent in China's economy and culture, Roberts challenges our assumptions about China's path and delivers a vital warning about risks ahead."
—Evan Osnos, author of Age of Ambition, winner of the 2014 National Book Award

"Have you ever looked at the miraculous urban landscapes of today's China—the Shanghai skyline, the Shenzhen roadways—and wondered what lies beneath? In The Myth of Chinese Capitalism, Dexter Roberts investigates the roots of China's boom, tracking how rural institutions, communities, and people have been sacrificed for the sake of cities. This book is a welcome reminder of the more than half a billion citizens who make their homes in the Chinese countryside."
—Peter Hessler, author and contributor to the New Yorker